At first I thought I could try and not go the Zentangle route and instead repeat a Tarot excercise where you select a couple of cards for one particular topic and find symbols in them, which you then arrange in a circular fashion, ending up with a Mandala that you can put up on your wall to remind you of the topic. I have done that once before and it worked really nicely.

But then yesterday I was a bit sad that Fengle did not want to be squeezed between those rings for the Diva's Challenge. So I got out the compass again and also my colour pencils and drew a rainbow Fengle, yay! Added some bits and pieces to give the Mandala more of a circular shape. Then I felt that I had to write something around it and this one circle chant suggested itself.

To be honest, I first counted the letters and gaps involved and divided by six so I could be sure it would fit. If I had written the text and ended up with a wonky chant circle around a picture I was really happy with, I would have had to... You know what? I just realised I could have cut out the mandala and glued it onto a fresh piece of paper. No hulking out necessary.

Still, sometimes I like to be safe rather than sorry (and having to fix things). Especially after my first allium photography page frustrated me so much, where the page itself looked nice and then this stupid typo happened. Am I the only one who sometimes pencils in the lettering first? 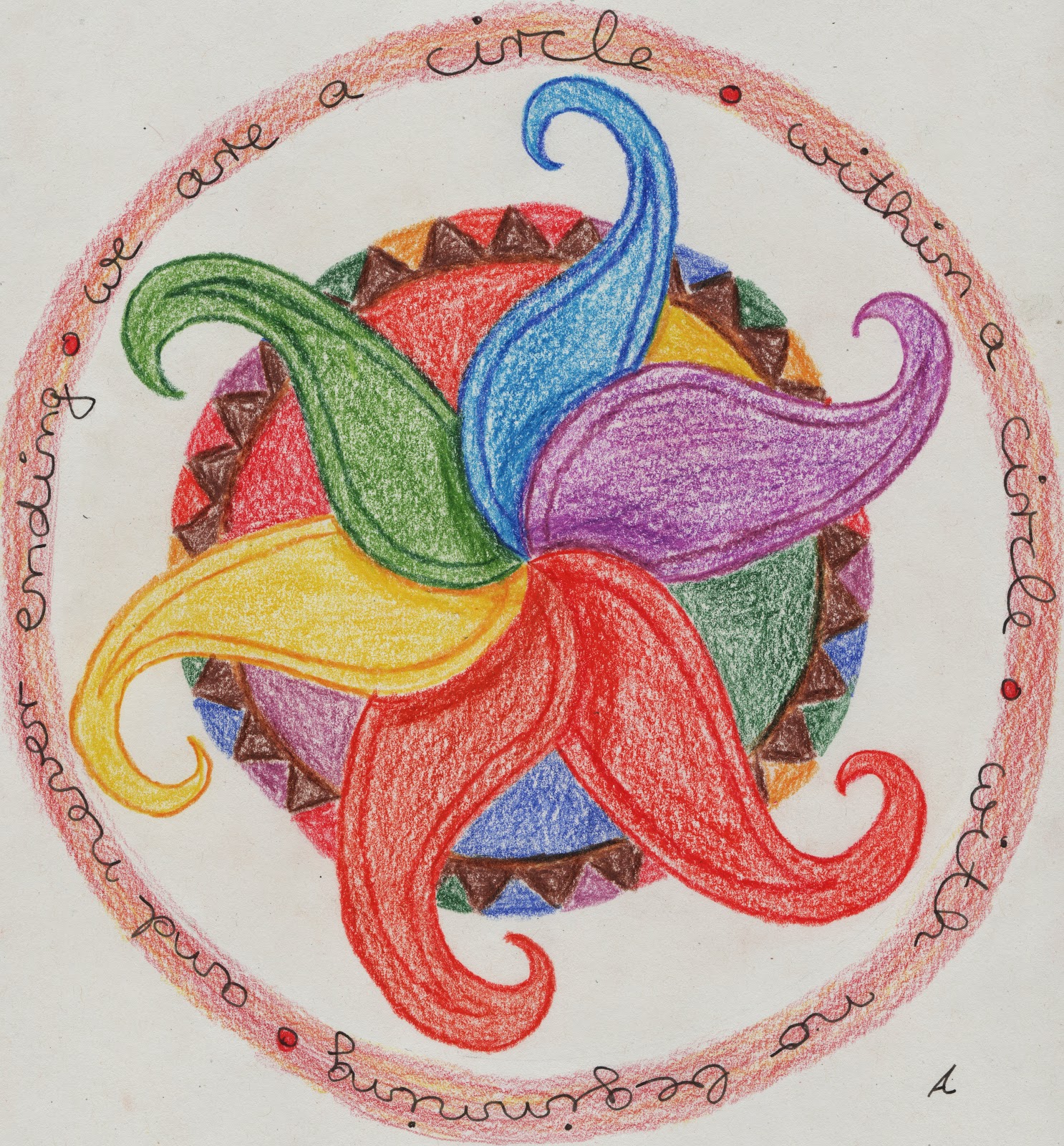 Last week my brain refused to cooperate on the String Thing Challenge, I still have no idea why. But this week the challenge kind of drew itself. The prompt is to use String 38 and only the pattern Knightsbridge which basically is a chess board pattern. You still have lots of time to draw your own tile and submit it.

I had wanted to try one of those "tear apart a grid" type drawings for a while, and today everything seemed to come together nicely. This time I am really chuffed about my tile.

There is not too much left of the string, which I am also pleased about, because usually it is difficult for me to use the string as a suggestion rather than something that has to be followed. 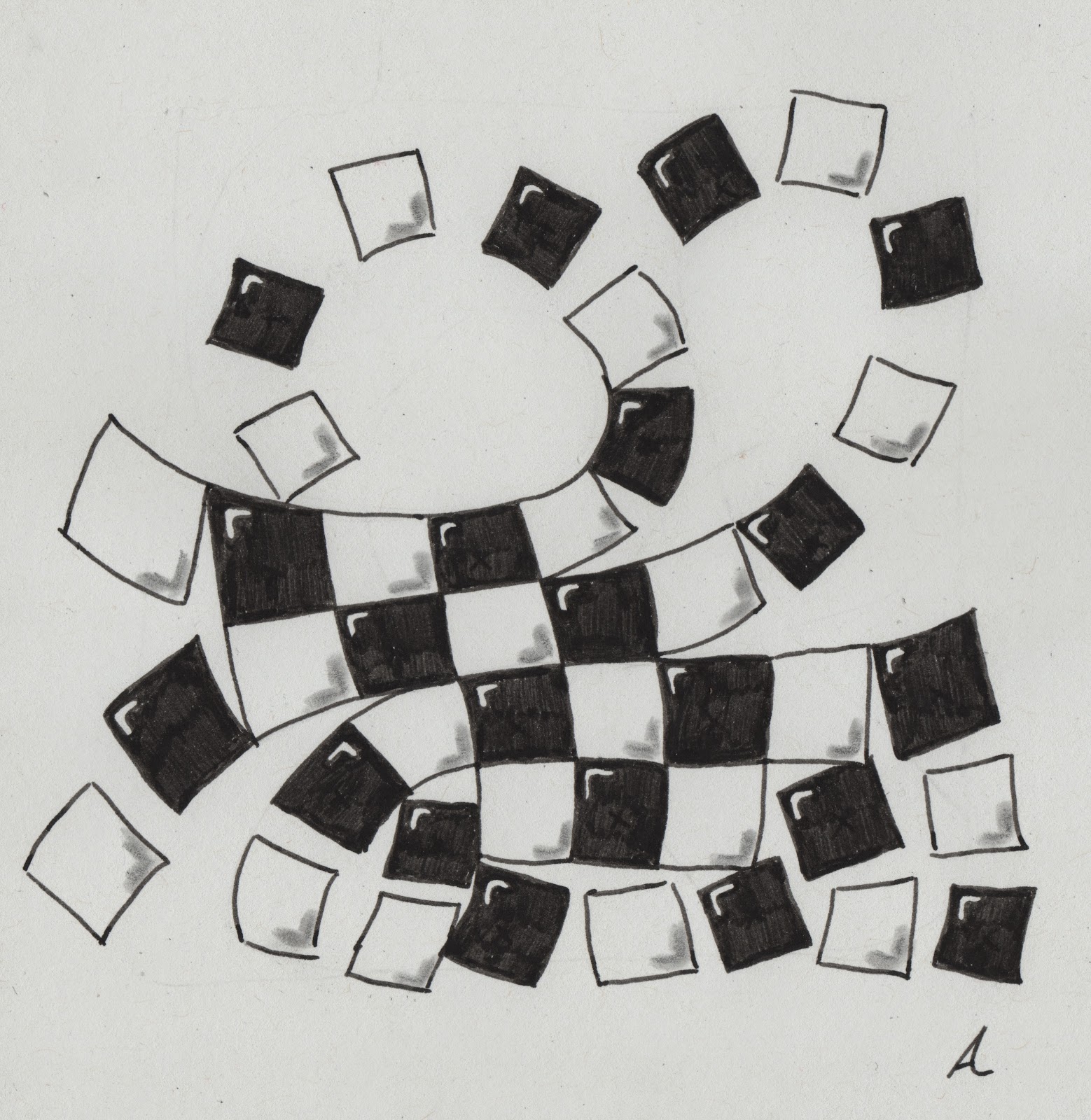 When is it going to be Tuesday, my good news day again? *bouncebouncebounce*
Eingestellt von caroona um 17:42 Keine Kommentare:

This week The Diva's Challenge is of the "String Theory" kind. We are supposed to make a string using circles. For this I got out my compass and drew several non-concentric circles of different sizes. Then an idea struck me of something wriggling over and under the rings I saw. Ar first I considered using Fengle but I would have had to really squeeze it in there. I might try it at a later time, but for now I chose Squid.

All I can say is that this was very fun and very Zen :) I am tempted to sell this as my Journal 52 page for this week, which is supposed to be a mandala. But then I really feel like drawing a mandala with colours and everything, so I guess there will be another post tomorrow. 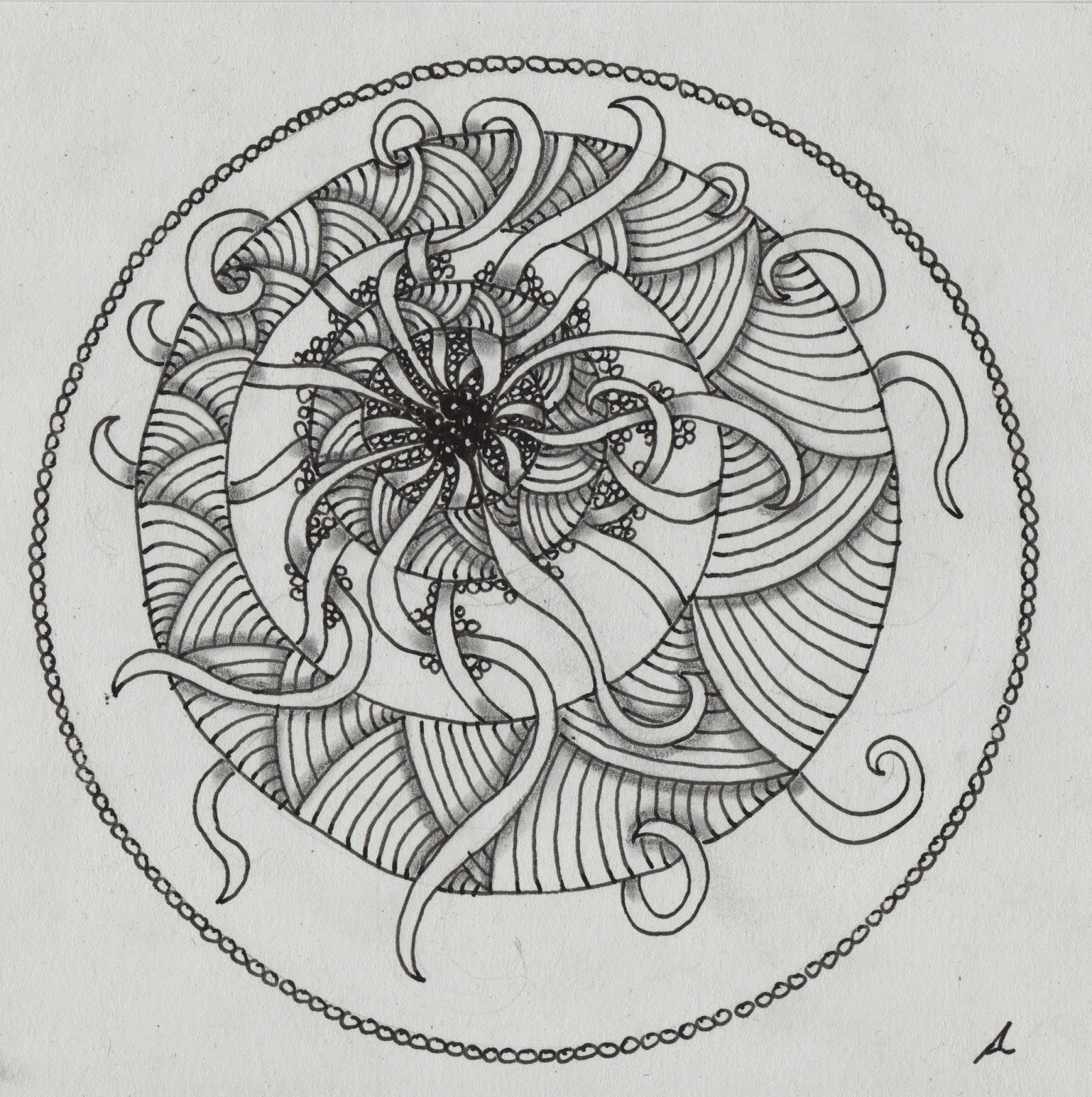 You can still submit your own tile. In any case, have a look at all the other artworks here.
Eingestellt von caroona um 20:42 15 Kommentare:

Slowly getting there. This is even a recent task from last week. The nice thing about Chelle's prompts is that they are quite flexible. I could not pick just the one really influential book so I chose to say something about reading in general. This is me as a kid. If I was nowhere to be found, you could bet I was hidden somewhere with (or rather behind) a book. Or if I got lost in a store my parents could usually find me in front of the stacks of greeting cards giggling at the jokes. As long as it had words in it, I could not resist. 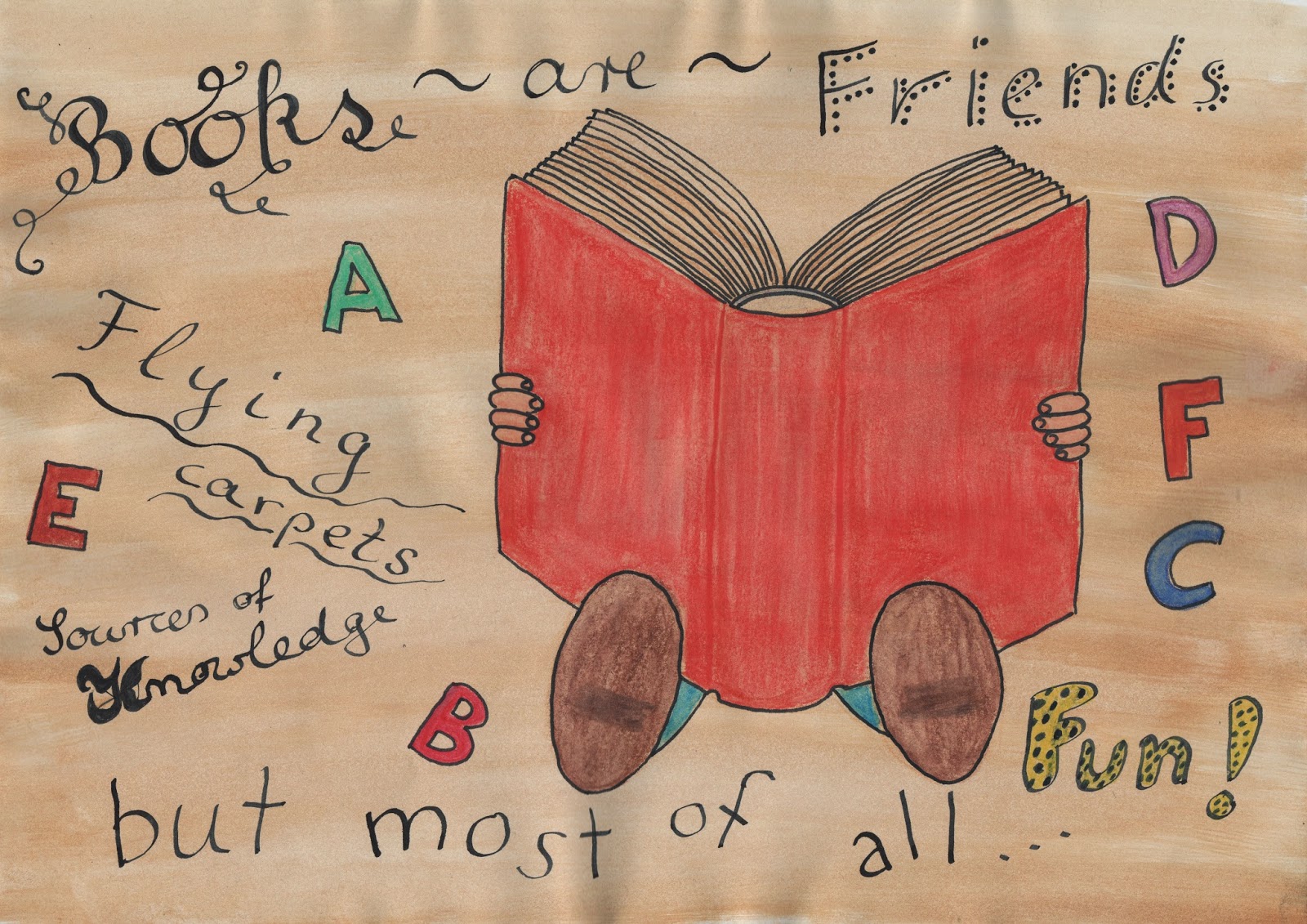 If you want to, you can still join. There are new faces turning up every week. And look at me, I have missed quite a couple of prompts and now just try to catch up in my own time. No pressure, just lots of fun! Have a look over here.
Eingestellt von caroona um 17:44 1 Kommentar:

Today, to celebrate her 10th Weekly Challenge, Joey challenged us to make a string out of a 10 and to use only tangles containing straight lines and circles. This was fun, not least because I jsut sat down and did it without too much thinking involved.

I don't think I have used Bubbles before, it looks a bit like eyeballs but also somehow nice. And I was happy to have an occasion to use Etcher. I usually darken the background with solid black, but this time I took the straight lines job seriously and hatched it. I like the pattern even more like this. It is not as complicated as it looks by far, but there is a certain amount of repetition which can turn really meditative. Thank you, Joey! 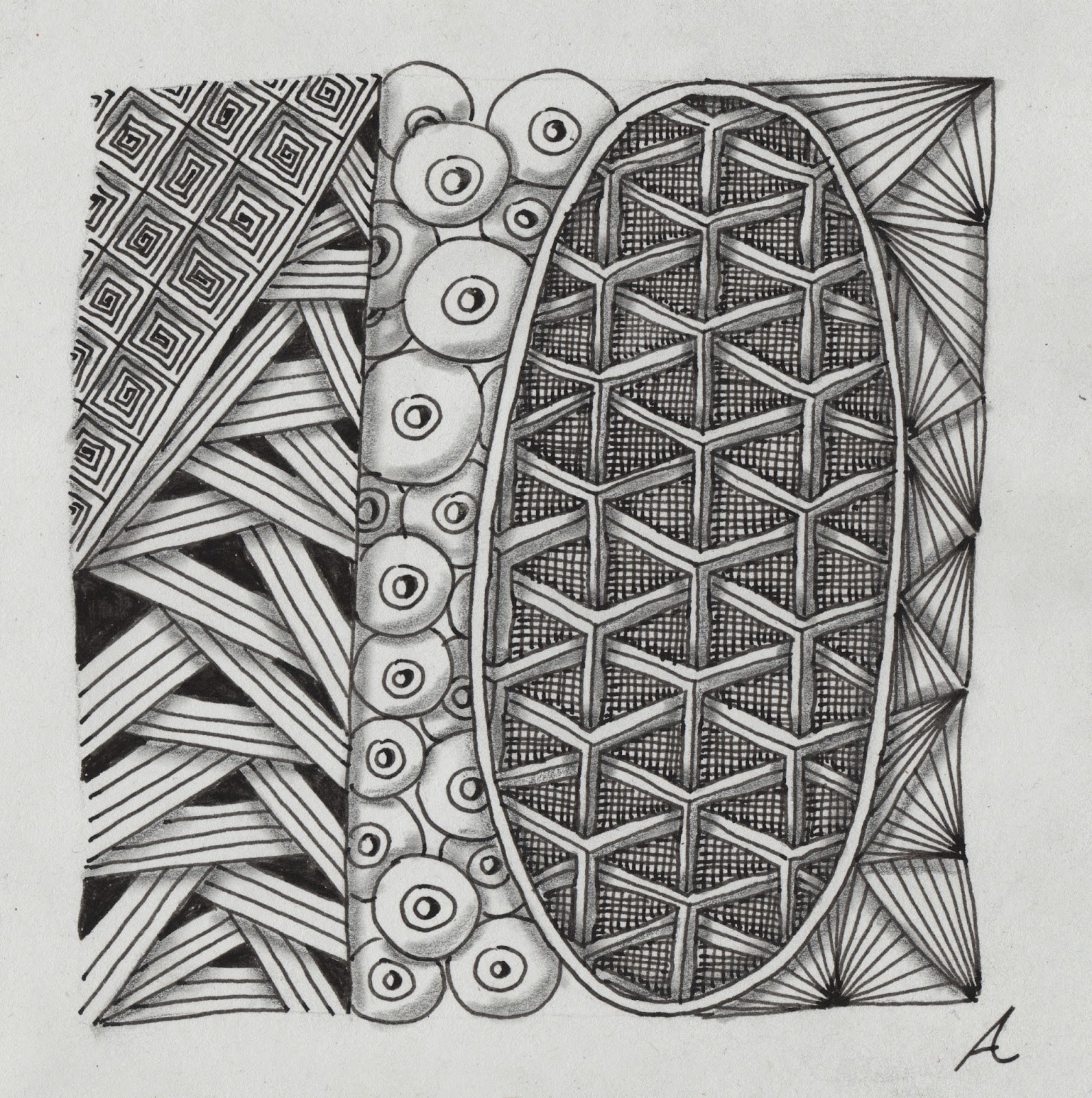 This was a quick one, in the end. The photo was taken in the gardens of a castle in Scotland, the name of which I have forgotten. I love the plush purple blooms of alliums. Every year I say to myself "Plant some in your own garden, so you won't have to be jealous of other peoples' alliums!" Maybe this note to myself can help me remember next bulb planting season. Which I have to figure out when it is.

The first version was printed out in grey-scale and then colour lovingly reapplied using water colour pencils. When I wrote the text, I forgot the u in allium. For a minute I considered to squeeze it in there with an arrow. Then I grumbled for another minute, opened the file again, maximized the saturation and printed the photo in colour.

The lettering was done by hand but it was based on an actual free font you can download. It is called "just kidding" and I liked its quirkyness.

I am so far behind in this project, but next week there is no school, yay, and I hope to get some things done that I have already sketched out just not put on paper properly. 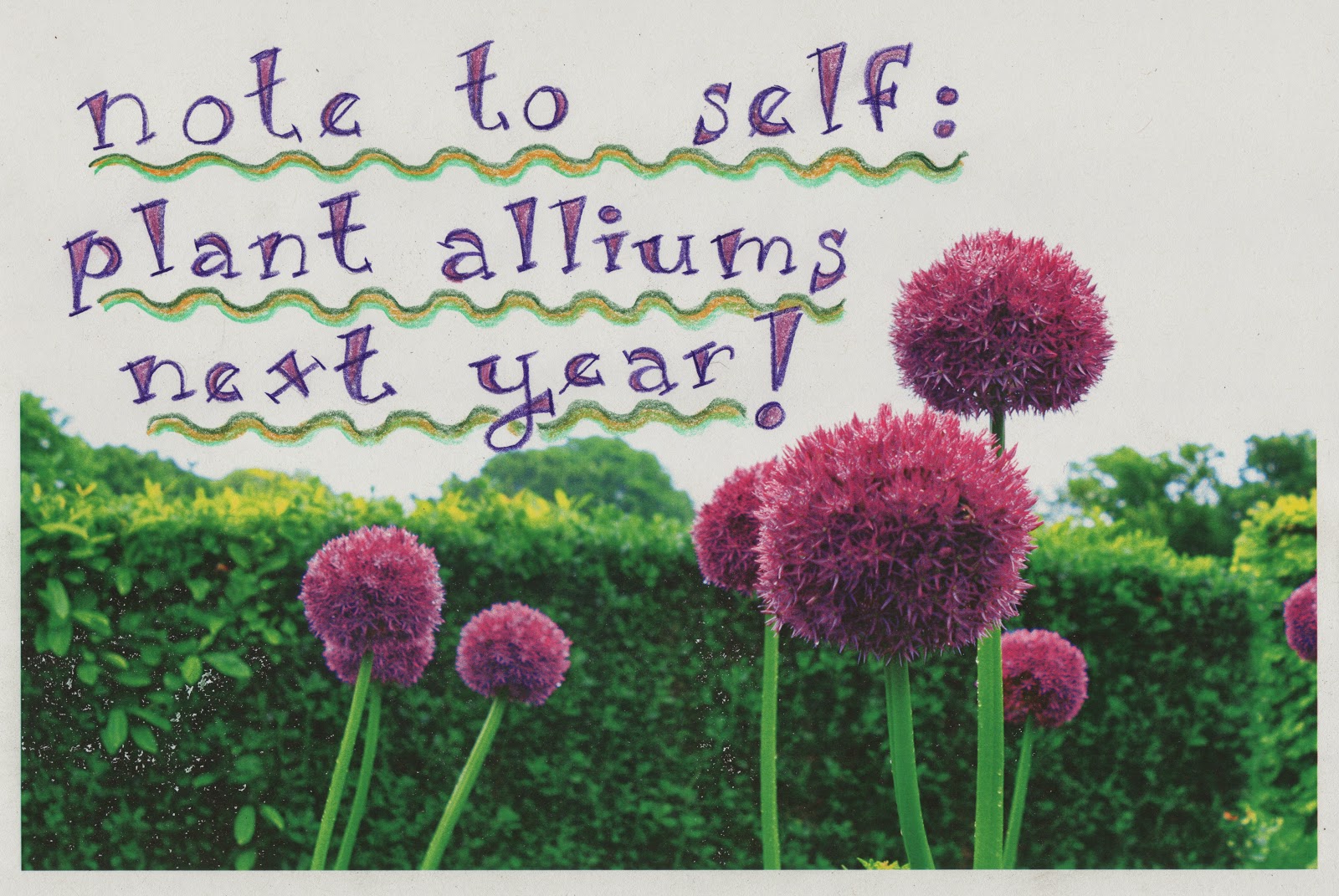 This week I am so very late for the Diva's challenge. I had to play with Rain for quite some time. I had not really used it before and I don't do tangleations very often. It seems there are "Rain in XY" combinations like the kinda Mooka I did. And then there are "XY in Rain" combinations that play within the triangles. And of course more complicated stuff, which I did not get into.

Eventually, I set down today to just do this and I am happy I did, especially since I did not manage a String Thing #41 due to complete lack of inspiration.

So thank you, Laura, for making me draw lots of Rain :) 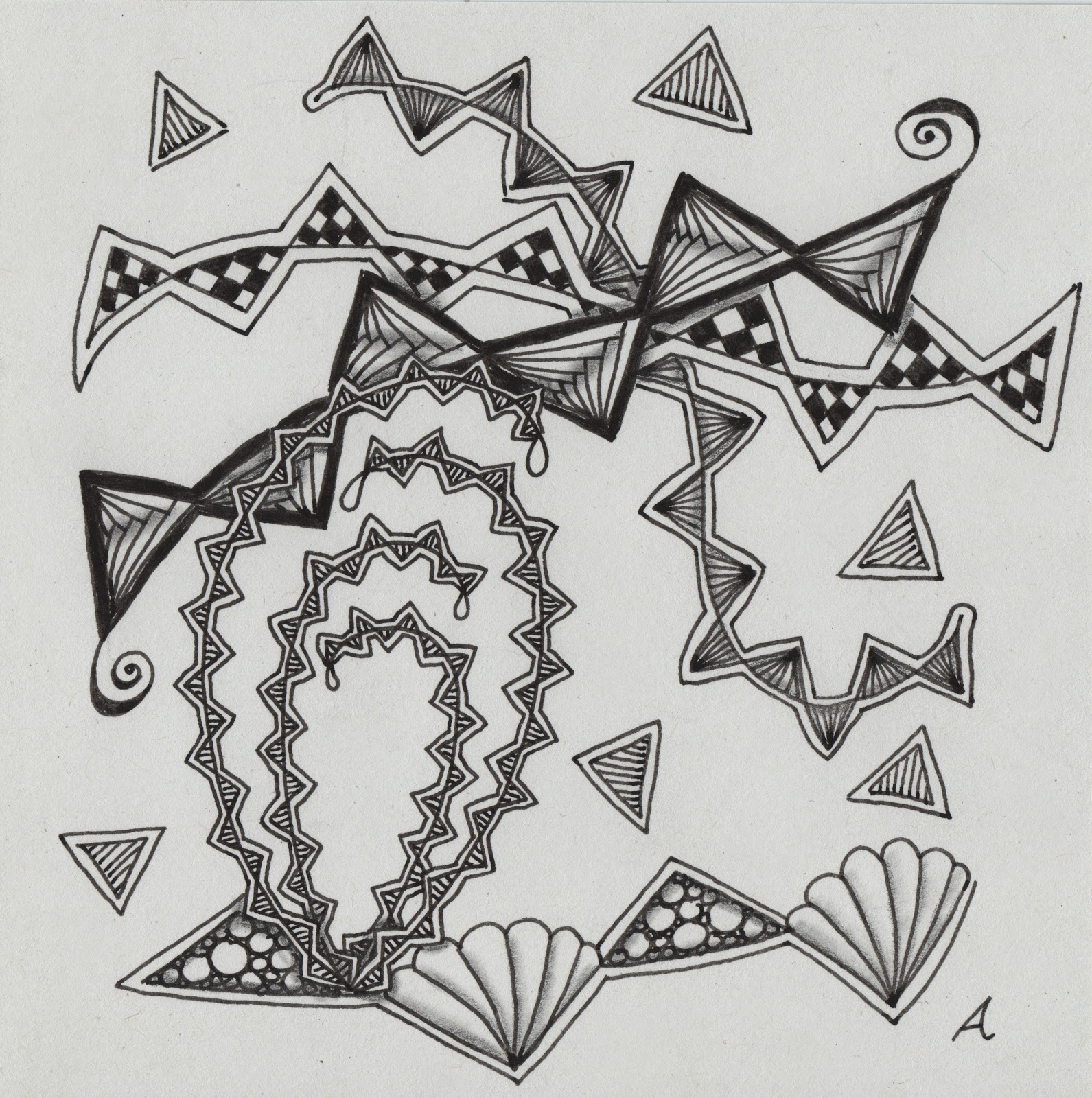